Once again. your humble blogger had a moment of happening upon a quote just begging to be shared- especially in this moment in time. Presenting without comment because nothing will do it justice: 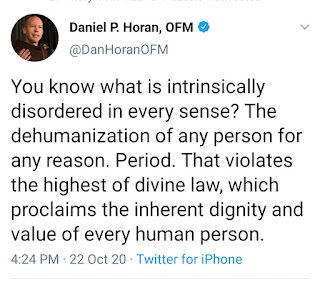 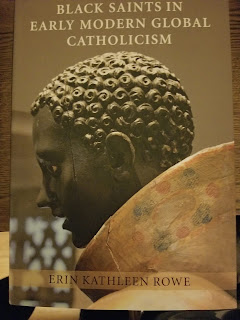 Recently, your humble blogger became aware of Erin Kathleen Rowe's Black Saints in Early Modern Catholicism through a social media post.  It was intriguing in that as someone who is Black and Catholic, it isn't common to see discussion of Black people, including saints who were Black, in light of the history of the universal Church. Thankfully, there are strides being made to change that, including Professor Shannen Dee Williams' #BlackHistoryisCatholicHistory work and Dr. Tia Noelle Pratt's Black Catholic Syllabus.  If memory serves correctly, the aforementioned social media post was a response to Professor Williams ' commentary. All in all, it was serendipitous that this led to reading Rowe's tome.
Black Saints deftly explores the veneration of Black saints in the early modern period,  from the 16th to 18th centuries. Through extensive research and analysis of images from religious sites in the Iberian peninsula that went long unstudied, Rowe illustrates how devotion to these holy figures, promulgated by enslaved Africans in the region at the time provided a different blueprint for looking at holiness,  blackness, and cultural power.  This blueprint,  she demonstrates, had a impact on the societies where these devotions occurred and eventually made its way to the New World.
It goes without saying that the history of Catholicism is deep and rich- so much so, there is much that has gone undiscovered. This is especially true in terms of the history and traditions of Black people in the Church and their impact on the Church globally. For those interested in this part of Catholic history,  Black Saints in Early Modern Catholicism and the work of Professor Williams and Dr. Pratt are definitely worthwhile engagements.
Posted by RI/RB at 8:49 AM No comments:

(Inspired by Nikki Giovanni's writing game for her students)
That we all-
Whoever we are-
live, love, and are loved
in the dignity and truth
accorded to us
as human beings
from the Most High
That is enough,
at least for me.
Posted by RI/RB at 5:39 AM No comments: 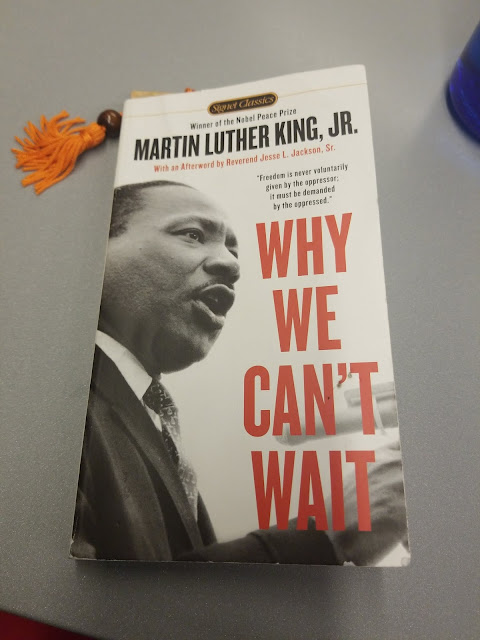 As anti-racism work has come to the fore over the past few months, many great books have been shared as sources to turn to. For your humble blogger,  one book has shown itself as necessary to add to the list, if it hasn't already- Dr. Martin Luther King's Why We Can't Wait. An illustrative reflection on the events leading to the civil rights movement becoming the force that it was (and is) in American society,  one can find many parallels between Dr. King's time and now. Given these parallels,  Dr. King's insights provide an essential blueprint on understanding and working in the fight for Black lives
Focusing on Birmingham, Alabama in 1963, each of the book's eight chapters eloquently probe the mindset and strategies at the heart of the movement. While steeped in historical context,  it conveyed to your humble blogger the sense of applicability for out time. Many of the issues Dr. King and his contemporaries faced are still with us today. This is recognized and often mentioned in the current work for Black lives. It also goes without saying that the civil rights movement has provided a blueprint for the justice work seen today. Thus, it would seem essential to explore the forces behind the movement that laid the foundation for what's being done now.
Current events have shown it necessary to understand the connection between circumstances of the past and now. Many voices are saying, "If you're wondering what you would have done in the Civil Rights Era, look at what you're doing now".  Why We Can't Wait shows us the mentality and strategy of that time.  Thus, it demonstrates itself necessary and useful today.
Posted by RI/RB at 1:39 PM No comments:

Earlier today,  in conversation with an acquaintance from outside the U.S. the subject came up about voting.  While it's been said a million times before,  it seems worthwhile to reiterate that voting can't be overestimated. This is especially true for local politics. In Camden, NJ, the Mayor set up a plan to overhaul the city's police department.  A notorious congressional representative from Iowa lost the Republican primary yesterday.  Ferguson, MO, where the killing of Michael Brown sparked national protests and the Black Lives Matter Movement, elected its first Black and female mayor.   While these are just a few examples,  it goes to show that elections matter. They can lead to substantial change, as seen in the scenarios above.

As recent events have reiterated, systemic changes necessary. Who gets into office can determine whether or not such change can be implemented. Exercising the ballot can thus not be overlooked.

P.S. here's the calendar for this year's primaries. Check to see if yours is coming up.
Posted by RI/RB at 1:45 PM No comments:

I wish there were more words,
Then again I don't.
It shouldn't have to be said
I'm tired.
We're tired.
Stop killing us.
Let us breathe.
If that's not enough,
I don't know what to tell you.

On wands and free will

What came to mind is it's hard to say if yours truly would want a magic wand. It made me think of Langston Hughes' "Mother to Son", where despite the Mother's life not being a "crystal stair", she kept going. That's not to say that problems shouldn't be acknowledged or suffering shouldn't be alleviated whenever possible, but that sometimes reality can't always be fixed with a "magic wand ".  Even if it could,  it would seem to be up to the individual to take that wand.  That goes to another insight that came up when pondering this subject.

A wand doesn't work by itself.  There's someone else holding it. Wiping away problems,  while the choice of the individual,  seems to be also a community effort.  No man is an island, as the saying goes, and the sentiment gleaned from thinking about this is the "magic" happens when the wand and an other come together in purpose.